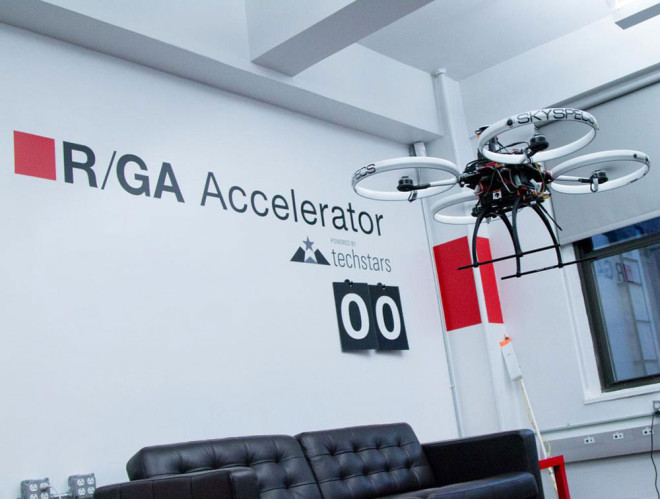 The skies of tomorrow will be filled with drones. Amazon and Google want to use them for deliveries. Construction companies are eyeing drones for building inspections. Filmmakers are already using drones to find new perspectives for storytelling. And of course, law enforcement agencies want to spy on us with them.

At a certain point, all of these drones are going to start banging into each other in our increasingly crowded skies. How do we prevent dronelock? Daniel Ellis, co-founder of the Michigan-based SkySpecs company has the answer. For the past five years, the SkySpecs team has been working on an object detection and avoidance system for aerial drones that could help even amateur pilots prevent dangerous collisions. Last week the company was accepted into the startup incubator R/GA Accelerator to help it get its first product, Guardian Crash Avoidance, to market.

Thus far, the Federal Aviation Administration hasn’t approved commercial unmanned aerial vehicles for many uses. That’s helped existing drone operations avoid trouble. “Drones aren’t running into other drones yet because there’s not that many drones in the sky,” Ellis says. But once the FAA starts permitting more uses, the blue skies could darken. “There hasn’t been an incident where a drone has crashed into an airplane yet, but that’s part of what we’re trying to avoid,” he says.

The Need for Flying Robots

There are already plenty of drone autopilot systems, such as the open source Paparazzi system, but SkySpecs is building a layer that runs above that, helping human pilots avoid dangerous mistakes. The technology could also be a boon to less-experienced drone pilots, says David Peachey, the vice president of engineering of wind turbine service company UpWind.

UpWind maintains and repairs wind turbines across the country. To inspect equipment, the company’s field technicians must either analyze photos of a turbine’s blades, or repel down from the top to get a closer look. Peachey says the company wants to use drones to get better photos of the turbines without the need to repel. The problem, he says, is two-fold. One, the FAA still doesn’t allow commercial use of drones. But even if UpWind could use drones, the company would have to hire experienced pilots to fly close to the turbines to get clear photos without crashing into them.