When AirDog first entered the consumer drone scene in 2014, things were looking up. The infamous rise and fall of Lily was just a speck on the horizon; Hexo+ was flying off the shelves and DJI’s Phantom 2 iterations were taking the industry by storm. Everything was pointing towards a hungry consumer market and the niche for extreme sports drones looked like a genuine opportunity.

But that was then. It’s been a rough few years for manufacturers in the industry. Parrot, Yuneec, GoPro, Lily, 3DR, Autel Robotics and many more… all have been faced with challenges after sales began to dry up (or not even materialize, in the case of Lily). Some have stopped making consumer drones altogether.

So where does AirDog stand upon its return? Does the new dog on the block have a chance of competing with DJI’s growing domination?

More of the Same

As you might expect, the AirDog II is an evolution of the company’s first drone and has plenty in common with the original. The unique wrist wearable that guides its flight – the Airleash – is back. And the target market remains the same, if not even more focused.

Understandably the company has decided to play to its strengths and focus on the Follow-me technology that proved so popular with the original. This is a quadcopter solely for extreme sports fans – the most hands-free drone on the market.

Connectivity is provided with AirDog’s long-range bluetooth system, with a maximum range of 500 ft.

So What’s New with the Airdog 2?

Even though the focus is clearly on sports fans, there are a few new features to help fill in the gap between Follow-me and all the bells and whistles found in DJI’s latest models.

For starters, AirDog now comes with a limited amount of obstacle avoidance. Downward-facing Lidar sensors have been added to stop it from crashing into water or ground as terrain height varies.

The ADII’s most advanced feature is 3D-Line Mode. Users can now set custom waypoints and altitude settings before a flight. This can be done through the AirLeash or Airdog app. This feature has been designed for use in areas where there are things to avoid, like existing structures or treelines. 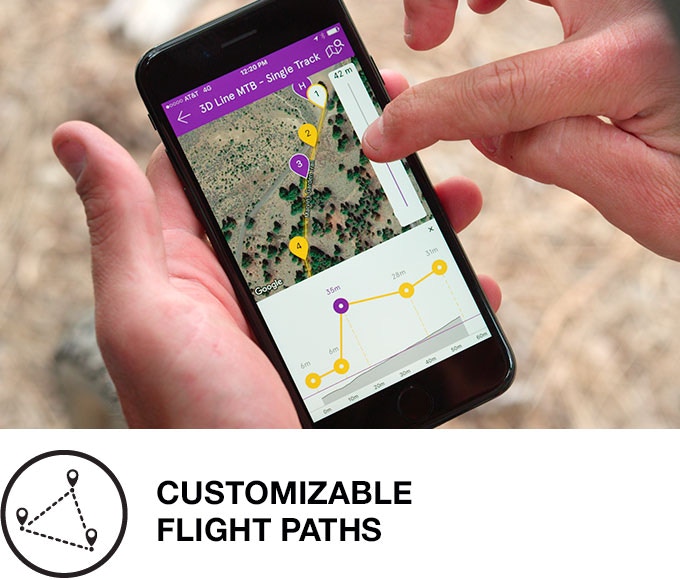 With 3D-Line enabled, the ADII will fly along a pre-programmed flight path while still following and keeping you in shot.

The next major improvement is an upgraded gimbal, which has been bumped up from 2 to 3-axis. Just like the original AirDog, it’s designed to be used with a GoPro camera. The ADII is compatible with the HERO 5 Black. The GoPro can be charged with the gimbal adapter, meaning there’s one less battery to change.

The Air Dog’s signature tracking technology has also been improved. It also features improved tracking. It’s GPS data is fused with readings from 9-axis IMU sensors (gyroscope, accelerometer, magnetometer) and barometric pressure sensor and transmitted to the drone in real-time.

The ADII has a top speed of 45mph (72kmh) and has wind resistance of up to 30 knots, enabling you to shoot in the roughest environments.

There are also a number of follow-me modes:

Fixed Follow – Once you launched the ADII, position it in the desired angle relative to magnetic north and it will keep that angle/perspective, locked at all times, regardless of your movement or change in direction.

Adaptive Follow – In this mode, the ADII will adapt to your movement direction. For example, the user can set the AirDog II to shoot from the front with the camera pointing towards the subject at all times regardless of extreme changes in trajectory or terrain elevations.

Circle – Want a more dynamic shot while cruising along the beach? Just hold left or right arrow button on AirLeash to command ADII to start circling around you while still following your movement.

Aside from the downward-facing Lidar, the AirDog II has safety features that include automated landing at a designated home point, which will kick in when battery is low or when you tell it to via the Airleash. We’re usually very wary of giving too much weight to the claims of crowdfunding campaigns. But given AirDog’s track record we see no reason why the company won’t deliver on its promises for a second time.

If you’d like to back AirDog II and get a discounted price on their newest drone, visit the Kickstarter page.

The ADII will have a retail price of $1500 upon release. But early backers can get their hands on one for considerably cheaper – as little as $1099. Shipping is expected in August, so we assume that production is already underway. So far they’ve raised $80,000. You have until Friday August 11th to get involved.