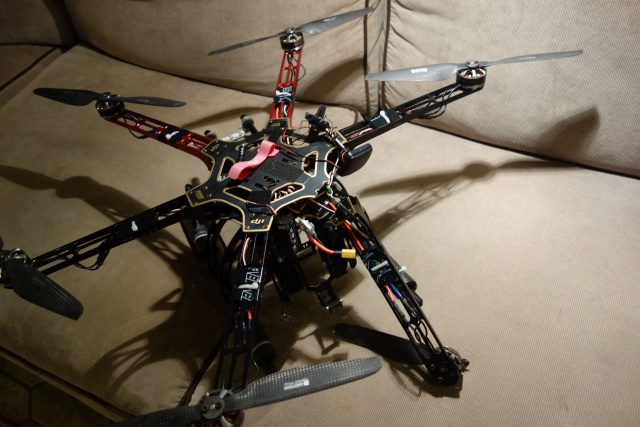 While we’ve heard of consumer drones getting in the way of commercial airliners and obstructing firefighting operations, we haven’t heard of many drones being shot out of the sky by a neighbor. But according to one drone pilot, that’s exactly what occurred in Modesto, California on November 28, 2014.

That day, Eric Joe skipped Black Friday lines and instead went home to visit his parents. During the afternoon, Joe flew what he described to Ars as a homemade hexacopter drone. His aerial device hovered low and moved slow, logging just three and a half minutes of flight time in total.

Then, bang. A loud boom rang out over the neighboring walnut trees. Growing up on a farm, Joe instantly recognized the sound as a 12-gauge shotgun. The unknown shooter hit his apparent target in a single attempt, and Joe soon watched his drone fall from the sky.

“When I went out to go find it, I saw him come out shotgun-in-hand,” Joe told Ars by phone on Thursday. The man found himself face-to-face with his parents’ neighbor, Brett McBay.

Joe claimed that McBay said: “I thought it was a CIA surveillance device.” No matter the reason, the drone pilot wanted to resolve this encounter quickly and civilly (“I didn’t want to get argumentative with a guy with a shotgun,” Joe said). He went back inside and inspected the aircraft. It wouldn’t be flying again. Later that evening, the two men exchanged e-mails.

It was nice to meet you and your son. I wish it could have been under different circumstances, but I have to give credit to the McBay school of marksmanship. Still, I’m pretty bummed that I just built this hexacopter only to have it shot down. Also, it was a little disconcerting to know that the spread of the birdshot/buckshot was in my direction. In any case, I had a chance to test the components of the downed hexacopter. Good news is that the more expensive components (on the inside of the frame) are in tact. Stuff on the outside of the frame took the most damage.
Joe included an itemized list of the damaged parts, which rounded up to an even $700.

With all do [sic] respect $700 dollars seems excessive. Perhaps in SF it’s normal for folks to have drones hovering over their property but we live in the country for privacy. I will be willing to split the cost with you but next time let us know your testing surveillance equipment in our area. I’ll drop a check of [sic] this afternoon.