From Barry Bonds and The Million Dollar Arm to Drone Inspections: J.B. Bernstein and Avisight are on Top of Their Game 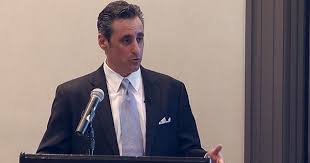 A major name in sports brings his business savvy to the skies with Avisight.

When my 17-year-old son heard that I was going to interview J.B. Bernstein, his first thought was that I had gotten the name wrong (surely his mother couldn’t speak to anyone that cool.) His second thought was that we must be going to talk about sports, and he was anxious to save me embarrassment by offering a quick crash course.  But while Bernstein is a major name in sports management, his new venture – Avisight – is on a whole new playing field: commercial drone inspections.

It’s a classic entrepreneurial story: find a great product, figure out where the market is – even if that’s not what you first expected.  Bernstein’s drone venture did actually begin from his involvement in sports.  “It’s ironic that I thought when I was getting into this it was to get drones across the lines [on sports fields]… but that was a lot further down the line than we thought.” “When I first found Avisight they were like any young drone company -they were involved in a lot of different verticals.  They were flying at football games, and the first thing I thought was, ‘Wow, we can replace Cable Cam!’   But that was back in 2015, and the response was pretty cold from the league.  They were more interested in anti-drone technologies and ways to keep drones out of the stadium.”

While the sports market waited on the sidelines to embrace drone technology – testing for flight over people at sporting events is a recent development in the industry – Bernstein focused on new markets.  “While I was wondering what I was going to do with this drone company, my team really educated me about industrial inspection – and that’s where we’ve been ever since,” says Bernstein.  “Not the clear and steady path I would normally take in business.”

An Evolution in Technology

It is, however, a path that has led quickly to Bernstein’s immersion in the drone industry, and Avisight’s position as one of the leading industrial inspection companies in the market.  Bernstein says that the industry represents a unique evolution in technology: “There are huge benefits to drone technology: lower cost, better operations, and safety,” he says.  “The magic of unmanned vehicles is that there are no men in them: if the worst case scenario happens, you’ve only lost a drone.  That’s so much safer.” “It’s very rare that these kinds of generational paradigm shifts happen in industries without an upward cost associated – to have a shift come with massive cost savings and gains in safety.”

Bernstein thinks big, and he’s an expert at navigating new markets.  He has put his talent in recognizing the unique strengths of a team and marketing them to the best customer to work as Avisight’s CEO.  The Avisight team’s origin story is one of those unique strengths.  “The team worked under Hoot [Gibson] in the AirForce and were on a team figuring out how to fly drones anywhere in the world,” says Bernstein.  “So our safety procedures and our command center look very much like a military setup.  That kind of precision lends itself really well to flying complex missions and critical infrastructure.”

“The Holy Grail” for Infrastructure Companies

Now as one of the leading industrial inspection companies in the space, Avisight has continued to evolve their solution.   “We’ve been developing our workflows, developing our portfolio, serving our clients,” Bernstein says.  “We think of ourselves as a data company.  We use a wide variety of sensors – we have the most sensitive LiDAR, multi-spectral, IR, methane: and we’re doing UAV integrations with a lot of these sensors.” “We’re all about the data – we collect it better and we use partners for processing that provide the best products,” he says.  “And that’s the holy grail for these infrastructure companies: data that helps them move from reactive maintenance to preventative maintenance.  We do that very well.”

Based in Nevada, Avisight is a partner with the Nevada Institute for Autonomous Systems (NIAS), an FAA designated testing sites. “NAIS has been an amazing partner.  We’re a node of the test site, and we’re one of a few drone companies certified by ABS to do close visual inspection by drone of all types of rigs,” Bernstein explains.  “The regulators do want credible operators doing these jobs – the worst thing that can happen is the one thing that nobody wants to talk about.”

While Avisight is all in on infrastructure inspections these days, Bernstein says that the industry is still at the beginning of its growth.  “Critical infrastructure is just the tip of the spear – they have the budget and the appetite to push the limits because they realize what the rewards will be.  These industries will lead the way for the use of drones.”

That sports idea?  It isn’t totally dead.  “Drones have been heavily integrated into movie making – over time, drones will be integrated into sports too,” says Bernstein.