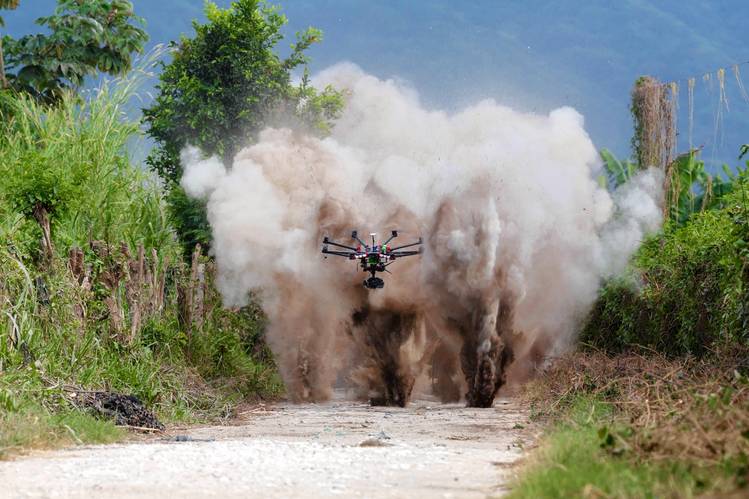 Four actors jump between rooftops and sprint through sheets drying on clotheslines while a camera tracks them from above, hovering close enough to see their faces. The sequence, filmed in Bogotá for the coming Netflix drug-war series, “Narcos,” was too intimate to capture by helicopter and too intricate to choreograph easily from the ground.

On the day of the shoot, a small unmanned aircraft, propellers spinning at the end of its eight spidery arms, lifted off the ground. Below it, two men operating the drone and its camera lightly thumbed joysticks on consoles to record the shot.

In recent weeks, drones have contributed to a hostage scene in “Scandal” and flown circles around Mary J. Blige in a music video. A drone buzzed the Kremlin for “Fast and Furious 6” and chased a speed boat over Bangkok’s Chao Phraya River for the coming “Mechanic: Resurrection,” according to people who worked on the aerials for both films. One unmanned aircraft swooped over the tree canopy for “Into the Woods” and another soon will gallop along the Chinese landscape for the Matt Damon film “The Great Wall.”

Used for everything from car commercials to news programs to televised sports, drones are becoming a permanent addition to aerial photographers’ toolboxes thanks to their relative ease, agility and low cost.

The remote-controlled aircraft are creating a new visual vocabulary in entertainment, delivering the stunning aerials once reserved for big-budget movies to even mundane projects. Pilots try stunts like weaving through the spokes of a Ferris wheel, careening around a live volcano or hovering over a shark’s open mouth. The drone’s signature is getting more familiar: shots that descend from high up and zoom through a tight space, speed low to the ground facing straight into the action or lift from intimate angles to huge panoramas in a single fluid movement.