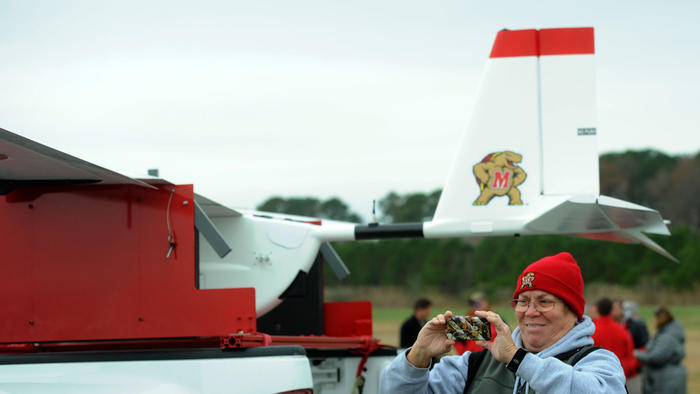 The pickup truck speeds down the runway of the airfield here on the Eastern Shore, a small, unmanned aircraft in its payload. And then the aircraft takes flight, banking over the heads of the spectators.

After years of planning, the University of Maryland’s drone test facility is open for business.

Unmanned aircraft systems are most familiar to Americans for their use in war to scout, spy and kill. Privacy groups have watched warily as law enforcement has started to experiment with them.

But there is a growing interest among businesses eager to employ them to deliver goods, monitor agriculture and measure environmental conditions, among other applications, and the Federal Aviation Administration is encouraging research into how they might safely be introduced into U.S. airspace.

But strict flight rules bar private companies from flying drones. Matt Scassero, a former Naval aviator who heads the test facility, says its aim is to “give industry a place to go.”

Companies will be able to partner with the university to get their projects airborne, Scassero said; plans are being put together to assess fish populations in the Chesapeake Bay, to examine power lines in Southern Maryland and to perform other jobs that humans find too “dirty, dull [or] dangerous.”

On Friday, Scassero’s team launched a Talon 240 drone — which, with its 20-foot wingspan, looks like an overgrown model airplane — from the Crisfield-Somerset Airport. Before the flight, the aircraft wiggled its wings and tail like a fledgling considering its first leap from the nest.