Drones are Delivering the Future 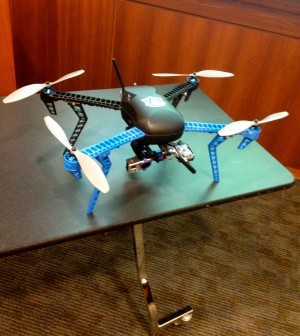 Before robotic and futuristic drones took to the skies, male honeybees were considered the original drone. Chase Murray, an industrial and systems engineering professor from Auburn University, used this little bit of entertaining trivia to open his seminar about Drones in Logistics. Drones are now known as unmanned aerial vehicles, and on Nov. 20 in Ekstrom Library’s Chao Auditorium, Murray led a presentation on these revolutionary devices.

Murray first gave a brief history of the drone, stating that the earliest man-made drone can date back all the way to the 1930s. Technology, however, has taken many advanced leaps since then. Drones are now being used for high-tech missions in the military as well as on the home front. The police force has been known for using them for surveillance and national park services have also used them for monitoring wild fires. Murray explained to the audience that this is only the beginning for drones.

“I think that you’re going to see these essentially flying robots augment the way we do business now,” says Murray.

According to Murray, companies such as Amazon and Australia based Zookal, have already begun working on direct delivery projects. In his presentation, Murray explained how delivery by drone could be expected to work. Trucks will be the mobile warehouses or ‘home base’ for the drones. While workers deliver the heavier packages, drones will deliver the rest right to people’s front doors. The idea creates a more cost and time efficient system.