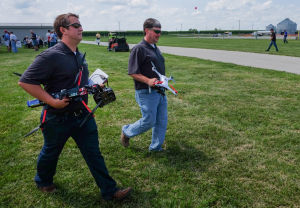 They came from across the country to learn more about the ways farmers can use drones to manage their sprawling fields.

They watched flight demonstrations. Listened to presentations by experts. And learned what it costs to operate a well-equipped machine.

But what they didn’t hear — at least not officially — was anyone urging them to actually buy a drone to use for farming.

That’s because the Federal Aviation Administration, just days before the gathering, delivered a blow to this young but promising farm tool.

In a fresh interpretation of rules governing model aircraft, the agency says you can fly a drone for fun, but can’t use one to make money or business decisions.

“It’s made a lot of us rethink how to approach it,” said Bill Wiebold, a soybean specialist and new drone enthusiast at the University of Missouri Extension.

Wiebold, who spoke at the Precision Aerial Ag Show earlier this month, said he’s been forced to adjust the language he uses when talking to farmers, who are increasingly interested in the technology. With the FAA’s current stance, he’s fearful of making suggestions that could get someone in trouble with regulators.

“There’s so much promise. But it’s just potential, now,” he said.

When farmers look at drones, or unmanned aircraft systems, they increasingly see tools capable of giving them a better handle on the health of their crops and their land. They can help determine the size of plants, weed infestations, insect problems and drainage issues. But most importantly, they can do these things quicker and more efficiently than is possible on foot, said Stu Ellis, an organizer of the show, which drew some 1,400 attendees from 33 states and six countries.

“You could spend four to five hours walking an 80-acre soybean field,” Ellis said, noting the same ground could be covered in half an hour or less by drone.

But even further, he sees a day when farmers use a small drone for scouting, and a larger model for delivering herbicides or pesticides to troubled areas.

The potential is certainly drawing the attention of farmers such as Matt Ganz, of Compton, Ill.

Ganz, who traveled to Decatur on behalf of his family’s farming operation, was intrigued by what he saw, though he was hoping for stronger diagnostic tools.

“From the air, it doesn’t tell you what’s wrong,” Ganz said. “You still have to get out and look.”

And with price tags in the $5,000 to $10,000 range for a well-equipped drone, he said it’s a bit pricey for a smaller operations such as theirs, with a couple thousand acres.

And then there’s all the uncertainty over what the FAA is going to do.

“I think we’re going to wait right now and see what happens,” he said.