How Swarm Drones are Mimicking Nature 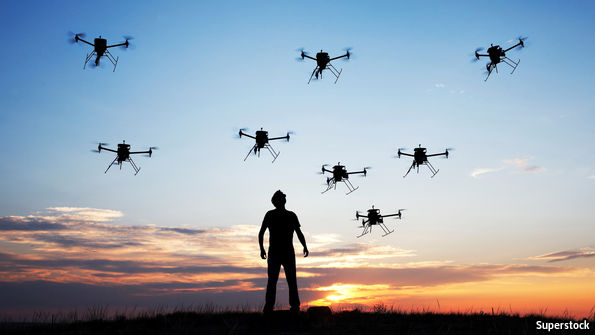 The notion of autonomous drones can conjure up dreams of easy, efficient parcel delivery—and nightmares of algorithms taking the place of human judgment in warfare. And now, robotic swarms are on their way. Researchers are working out how to deliver their most basic requirements: a swarm must fly without drones crashing into their surroundings or each other; the whole system must also act and make decisions rapidly within the limits of the processors and information available to each drone. How are researchers achieving this?

The key has been to take a cue from swarm intelligence in nature. As with an ant colony—which makes decisions about problems like job allocation that a single insect could not fathom—each drone in a swarm can make decisions based on the stimulus of its neighbours and immediate surroundings. Unlike a single sophisticated drone, a swarm of drones could function even if some members break down. Swarm intelligence self-organises, so it has no problem absorbing new members that only have to follow simple rules.

An effective swarm would be based on minimal but effective communication between its members, each of which makes its own decisions based on local stimuli. Flying towards a narrow pass, for instance, would be a cue to bunch up, while turbulence might require the opposite. GPS receivers could be used to orient each drone relative to its neighbours, but cameras and software capable of object recognition are more versatile and less prone to system failure. Researchers are taking inspiration from ant colonies which regulate their activity without central control: the first foragers will only venture out if stimulated by the scent of sufficient numbers of returning patrollers. This protects them from dangerous weather or predators. If the first ants struggle to find food they will return in a trickle too slow to stimulate others. Thus by following a simple rule, the colony organises itself. Drones could similarly make more complex collective decisions beyond simply following each other in a flock.

The possibilities are endless. Algorithms already exist to clean up grids with swarm intelligence in models where some tiles are “dirty” and spread their dirtiness to adjacent tiles over time. Collaborative “agents”, which have limited vision of the grid, render tiles clean when they travel over them and follow simple rules to clean up the grid efficiently. The framework is reminiscent of forest fire control, for which drone swarms may be ideally suited, and the algorithms can be adapted to solve similar problems in hunting evasive targets. Unmanned military aircraft could overwhelm targets from all directions without the loss of individual units posing a problem. For agriculture and environmental monitoring, they could amass a huge amount of data to inform practices and policy: a swarm may monitor an area continuously even as its members swap in and out as they break down or recharge. Indeed, drones may emerge as the solution to many problems and in swarms, beyond mere parcels, they may deliver.