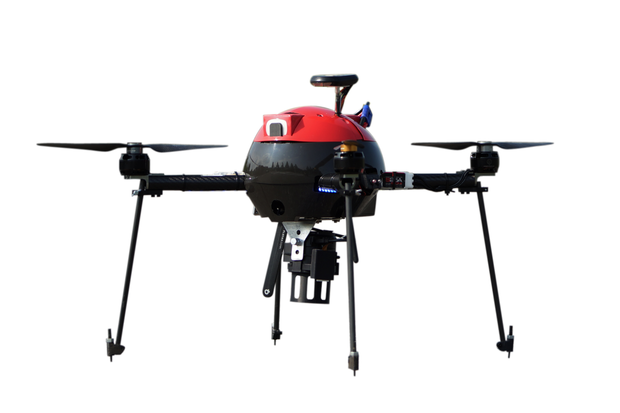 Sony is gunning for a slice of the growing drone market, showing off newly developed unmanned aerial vehicles (UAVs) from its just-launched drone venture, Aerosense.

In addition to the vertical takeoff and landing (VTOL) craft hinted at last month, Aerosense on Monday exhibited a quadcopter that makes use of Sony’s lens-type camera, the QX30.

The camera, which resembles a lens for a digital single-lens reflex (DSLR) camera and can link to smartphones, is attached to the belly of the quadcopter, where it can take high-resolution images.

Designed for use in urban areas such as construction zones, the AS-MC01-P quadcopter weighs about 3 kilograms (6.6 pounds) and can fly for about 15 to 20 minutes on a battery charge.

It can operate autonomously, flying within a preset zone, and is equipped with GPS, Wi-Fi and an inertial navigation system. It also has a high-speed data transfer module that uses Sony’s TransferJet technology.

In a presentation in Tokyo, Aerosense showed how photography from the camera can be turned into 3D imagery, showing, for instance, the volumes of piles of gravel at a construction site.

The venture’s other craft, the AS-DT01-E winged VTOL drone, has a rotor system that allows it to fly like a helicopter or a plane. The advantage of the winged format is that it can fly at much higher speeds than most non-military drones — up to 170 kilometers per hour (106 miles/hour) compared to high-speed quadcopters that fly at 75 kph (47 mph).

Weighing 7kg (15 pounds), it can carry a 3kg payload (6.6 pounds) and operate for at least two hours on a battery charge.

Aerosense will target enterprise customers when it begins to offer drones for monitoring, surveying and inspection next year.

Potential applications include photographing agricultural land, mining sites and mountainous areas to check for damage after a storm.

Sony wants to use its smartphone technologies such as cameras and networking know-how to give Aerosense an edge. Sony Mobile Communications owns just over 50% of the venture, with the rest in the hands of Tokyo robotics firm ZMP, which set up a robot taxi company earlier this year along with mobile gaming giant DeNA.

Sony also has robotics resources that it is putting into the drone business. Aerosense’s CTO is Kotaro Sabe, who worked on the electronics maker’s Aibo robot dog and Qrio humanoid robot, both of which were shelved when Sony shut down its entertainment robot business about 10 years ago.