How Drones Can Have A Place In Health Care 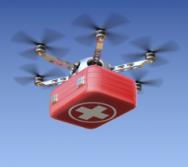 However, in the healthcare sector, the most prominent use of drones would be in the delivery of medical supplies.

“In situations where people are injured in places that are inaccessible, drones can be useful for immediate delivery of drugs,” said Fortin. “With average weight load of up to five pounds, medicines, bandages or even defibrillator can be transported to such areas for first aid.”

Earlier this year, the World Health Organization and the Bhutanese government collaborated with Matternet, a California-based unmanned aerial vehicle (drone) developer, to provide drones for Bhutan.

Because of Bhutan’s unique characteristics, this small country is ideal for demonstrating how ground-breaking drones could be in the healthcare industry.

First, as documented by the World Bank, the country has approximately one physician for every 3,333 people. Secondly, because of the country’s diverse geography and climate, reliable emergency healthcare is impossible.

While drones have not been tested under severe weather conditions, they have had no notable difficulties in traversing the drastic climate and atmospheric changes of Bhutan.

Ideally, drones will fare well in unfavorable weather and thus function as vehicles of emergency first aid care in instances such as the United State’s Hurricane Katrina disaster.

In densely populated areas, drones could navigate traffic congestion and deliver medical supplies or even regular home-based healthcare services such as prescription medication.

As a fully autonomous machine, drones could be programmed with specific delivery points and delivery schedules, making the technology viable in healthcare delivery.

This characteristic would also prove useful in sparsely populated areas with limited accessibility. In such remote areas where regular access to a physician is difficult, drones could provide regulated medical supplies.

WHO’s partnership with Matternet also aims to alleviate Bhutan’s health struggles caused by the shortage of physicians in the country. Part of the idea is to relieve physicians of certain petty duties, so they can focus on the more complex ones.

Theoretically, drones could be programmed to administer medications to patients with life-threatening communicable diseases, like Ebola.

According to WHO, 45.8 percent of WHO Member States have less than one physician per 1,000 people. This statistic shows how useful drones could be in healthcare delivery. Drones can also be useful in the first world.

For instance, PricewaterhouseCoopers found that with 25 million newly insured patients in the United States, the shortage of physicians is sure to increase. With this need, there becomes a gap in the system, which could pave the way for technologies such as drones to join the workforce.

Promising as this technology may be, it will encounter roadblocks. Despite Fortin’s insistence that drones are not made to be spying devices, many already speculate that drone technology infringes upon their privacy.

Regardless of the reservations, the benefits afforded by drone technology may be realized in health care within the not-so-distant future. “Drones certainly have a place in health care,” Fortin said.