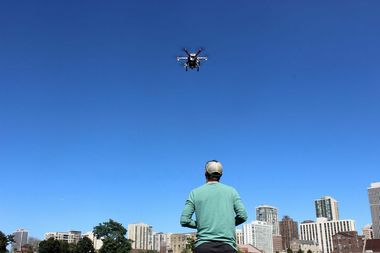 As thousands of fans moved to the beats of Skrillex at Lollapalooza last month, their eyes were directed away from the stage, to the sky.

“Everyone look at the UFO up in the sky!” Skrillex shouted. The crowd went wild.

What they saw wasn’t a UFO, of course. It was a 2-pound, four-propeller drone belonging to Downtown resident Alfredo Roman, 30.

A lifelong Chicagoan who grew up in Pilsen and dabbles in photography, Roman said Lollapalooza stoked his interest while he was flying his drone around the lakefront that evening.

“I just saw strobes everywhere and lights everywhere, and a lot of action, and I just went over there,” said Roman. “I can’t say I was thinking a lot about it.”

His drone, a DJI Phantom 2, captured a rarely seen vantage point of the flashing lights and booming bass that is a hallmark of the festival — exactly as he intended.

“It’s a way to capture certain scenes for my own personal use,” said Roman, who likes photographing architecture and has used his drone to get up-close-and-personal views of bridges spanning the Chicago River and a coal-fired plant in Pilsen.

Drones entered the American consciousness in the last decade as they were deployed over conflict zones in Iraq and Afghanistan. For civilians, drones, also known as unmanned aerial systems, have become a widely available and increasingly common tool to record videos. In Chicago, a growing number of drone enthusiasts use the machines to showcase the city.

River North resident Matt Makris has been flying drones — or R/C aircraft, as he calls them — for about six months. He’s built two of his own, and is constructing a third.

His favorite place to fly his aircraft is near the former Cabrini-Green public housing project, where his videos have captured the eeriness of abandoned row houses and rusting basketball hoops.