Airware is Propelling Drones Into the Future 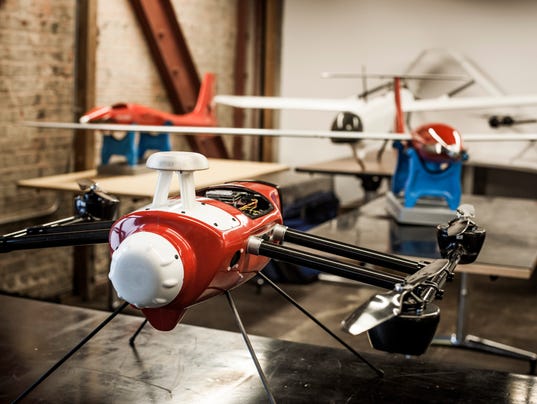 Jonathan Downey was born into aviation. Now the son of two pilots is navigating the shimmering future of remote-controlled aircraft.

Downey is the founder and CEO of Airware, a San Francisco start-up that is designing hardware, software and data storage for commercial drones.

Downey compares Airware’s operating system that guides commercial drones to Windows, which enabled broad use of home computers. With Airware, remote pilots program flight paths from a tablet, while still being able to change plans during flight.

After tinkering for nearly four years – and raising more than $40 million in venture capital – Airware unveiled its system in April. Customers are now sizing up the company that has grown to about 80 staffers as the commercial drone industry begins to take flight.

“Commercial drones will change the way we do our jobs, improve our decision-making and save lives,” Downey says.

Airware is one of 10 finalists in USA TODAY’s Small Business Innovator of the Year contest. More nominee profiles will run in the coming months, and a winner will be announced in December.

Downey’s advice to other innovators is to find an opportunity to join high-growth start-ups to help prepare for creating your own. “Before diving into your own start-up, get your feet wet working for other start-ups in varying degrees of growth to best prepare you for managing and building your own company,” he says.

Part of Airware’s value is versatility. While most drone software is designed for specific fixed-wing planes or roto-copters, Airware aims to work in all sorts of aircraft. Power-line inspectors, for example, might need a plane to fly along miles of elevated line, while a copter could hover up and down near a specific tower.

Airware spent years developing its products. One client was the Ol Pejeta Conservancy in Kenya, which boasts Africa’s largest black-rhino sanctuary with about 100 of the endangered animals. Drones could help staffers count the rhinos and discourage poachers across the 90,000-acre conservancy, where Airware staffers spent nearly two weeks conducting test flights in December 2013.

Testing the autopilot for a drone 25 miles away and 500 feet in the air was “fantastic,” says Robert Breare, the conservancy’s chief operating officer. When a tractor inadvertently cut a cable to the pilot’s antenna, the drone returned to its takeoff spot automatically, he said.

But Breare says cameras and thermal imaging are very expensive to get the resolution needed to track animals at night.

“It’s a really impressive auto-pilot system,” Breare says. “What we were looking for was absolute simplicity and something that could be operated by anyone, not necessarily a pilot, with total long-distance autonomy for the aircraft.”