Do We Really Want Amazon’s Delivery Drones in Our Skies? 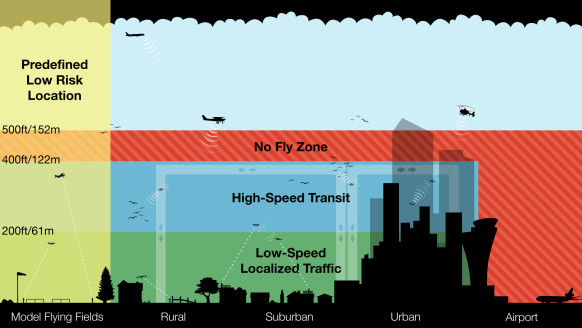 Lest you think Amazon’s much-hyped plan to deliver packages by drone is a flight of fancy, the company has just shared its vision for the future of autonomous drones.

In the company’s vision, presented at NASA’s Unmanned Aerial Systems Traffic Management (UTM) Convention last week, delivery drones will zip around the sky a few hundred feet over our heads. They’ll be smart enough to see and avoid other drones, and stick to predetermined layers of airspace to keep everything running smoothly.

In a few decades, the skies will hum with robots that bring us prescriptions, batteries, potato chips and everything else we’re too lazy to pick up ourselves. But are we trading in quality of life for convenience?
Delivery by drone promises several benefits. Less reliance on polluting, traffic-inducing trucks to make deliveries. No repeat trips to the store because we forget things. The classic charm of the neighborhood milkman can be replaced with the cat-terrifying thrill of a milkdrone.

But the increasing popularity of drones is already the source of lots of complaints and worries. They’re noisy and generate privacy concerns. They interfere with other low-altitude airspace users, like cropdusting farmers and Boy Scouts shooting off model rockets. They cause trouble flying around wildfires and airports. What happens when they go from being common to everywhere? Does Amazon’s vision for the future account for how it affects people on the ground?

Amazon says it isn’t planning to build Jetsons-style highways in the sky, with drone after drone whizzing along carrying packages, but the drones could still make an awful racket if you lived near a warehouse facility or your neighbor buys a lot of stuff.

Still, drones wouldn’t be the first promising technology to get the NIMBY-treatment. Yeah, wind turbines are great for generating clean power—until you want to put more than 150 of them off the coast of Cape Cod, and residents go bananas.