As U.S. Dithers, Rivals Get a Head Start on Drones 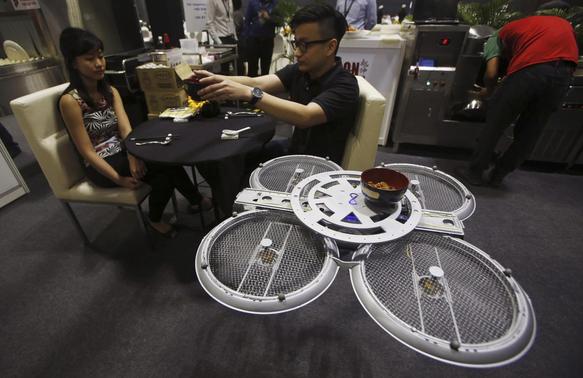 Drones, or unmanned aerial vehicles (UAVs), are a hot ticket in Silicon Valley, but U.S. government dithering over regulations has given overseas companies a head-start in figuring out how best to exploit them.

Global spending on drones could add up to close to $100 billion over the next decade, with commercial uses – from farming and filming to pipelines and parcels – accounting for around an eighth of that market, according to BI Intelligence.

But for years, the Federal Aviation Administration (FAA), the authority largely responsible for regulation in the United States, has dragged its feet, only last month issuing draft rules on who can fly drones, how and where. It’s likely to be a year or more before the regulations are in place – good news for companies operating outside the U.S. and looking to build a business around drones.

Sky-Futures, a British company that dominates the use of drones to collect and analyze inspection data for oil and gas companies, says its business soared 700 percent last year as the normally conservative energy industry embraced the new technology. Co-founder and operations director Chris Blackford said the company is coupling drones with software and a better understanding of what works in the field, giving Sky-Futures “a head-start over the U.S because we understand pretty intimately the problems facing the oil and gas market, and how we can solve them with technology.”

Looser regulations outside the U.S. have created pockets of innovation attracting ideas, money and momentum, says Patrick Thevoz, co-founder and CEO of Swiss-based Flyability, which builds drones inside a spherical cage that allows them to bump through doors, tunnels and forests without losing balance.

Another British company, BioCarbon Engineering, hopes to speed up reforestation by using drones to plant germinated seeds, and shares in New Zealand-based Martin Aircraft trebled in the first few days after listing in Australia last month, on investor hopes for the personalized aircraft maker which is developing a UAV that could be used by the military, oil and gas, mining and farming industries.

In Japan, the government is looking to fast track industry-friendly regulation to give its drone business an edge.