What Our Paranoia About Drones Says About Us 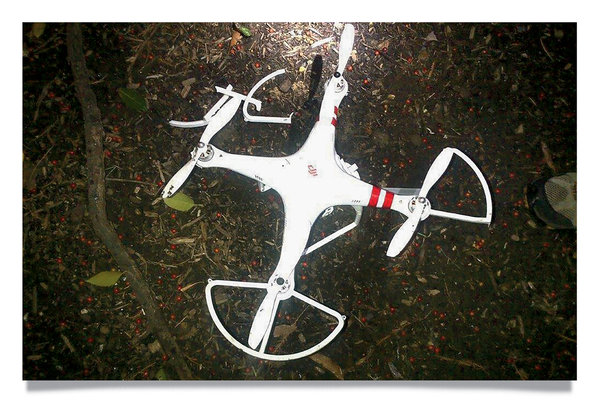 A lazy drift of mist obscured an already gray November morning as I stared skeptically skyward in Morningside Park. It was not, I told myself, technically raining; still, moisture had begun to collect in the folds of my jacket as I surveyed the weather conditions.

Driven more by impatience than by prudence, I decided to go ahead with the plan. Carefully following the precise sequence prescribed by the instructions, I switched on my remote controller and then the Wi-Fi transmitter, and finally double-pressed the power button on the back of the DJI Phantom 2 Vision quadcopter I purchased the night before.

The copter trilled, then emitted four consecutive beeps. The GPS system began searching for satellites to map its launch coordinates, and a moment later the rotors whirred to life, sending ripples across a nearby puddle. And then the drone was airborne, rising to a hover six feet above me, conducting an aerial choreography to maintain its position despite the wind pushing it toward Manhattan Avenue. The copter streamed an image to my iPhone — me with my cap pulled low against the November drizzle, head tilted to meet the camera’s gaze. A drone selfie. Portrait of a man under self-surveillance.

There is no practical reason for me to own a drone. I was not, before this purchase, a remote control (R.C.) enthusiast. I have zero background in aviation. I divide my time between New York and Hartford, cities where crowds and aircraft traffic are abundant. I justified the substantial expense as an investment in my nascent interest in photography, though I could most likely profit more from the earthbound mastery of F-stops and shutter speeds before trying to combine them with the peculiarities of pitch and yaw. But no matter. I shot six minutes of aerial video that first morning, despite the manufacturer’s warning against flying in the rain.

Elevate 100 feet, and the fading autumn tree line looks like a cascade of magenta and orange, as if the city’s edges were hand-colored. The dejected wooden fencing in the baseball field now looks like an archaic crop pattern, not a halfhearted attempt at dividing a municipal play space. Now ascend another 75. Turn west, and there is the Cathedral of St. John the Divine. So that’s what the grand building looks like from above. Construction scaffolding obscures the grounds from pedestrians, but from above, the boards conceal no grand mystery. Just wet earth and construction machinery in disarray. Columbia University rises in the background, and beyond that Harlem, and beyond that ambiguously configured blocks and towers, none of it novel, all of it fascinating from this vantage point.