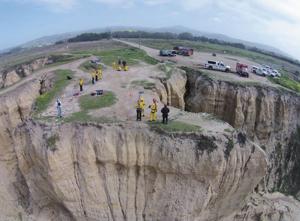 In search of a bird’s-eye view of emergency situations, the Coastside Fire Protection District could be turning to an increasingly popular new technology: drones.

In recent months, local fire officials have suggested buying an unmanned aerial vehicle — better known as a drone — saying it would be an invaluable tool for reconnaissance and rescues, especially in an area like the rural coast. If approved as part of next year’s budget, the Coastside fire district would be the first agency on the Peninsula to take on a drone as well as some of the unanswered questions surrounding the technology.

The uses for an unmanned flyer equipped with a camera are boundless, according to Coastside Fire Assistant Chief Paul Cole. He envisioned drones becoming a commonplace tool for firefighters as they scout out dangers before sending in crews. It could be possible someday to have drones drop rescue rafts for victims during a water rescue, he said.

For now, the perfect scenario, he said, would be a treacherous spot like Devil’s Slide. It’s routine for firefighters to hear of vehicles that have gone off the roadway north of Montara. Sometimes these are real emergencies, Cole said, but just as often they turn out to be false alarms. In either case, the only current way to verify the nature of the call is to send firefighters climbing down the precarious cliff side.
“I can’t tell you how many times we’ve had a team rappelling down the cliffs, only to find it’s an abandoned vehicle,” Cole said. “What a great tool a drone would be here. In this type of area, it just makes sense.”

With a drone, Cole believes an engine team could perform initial scouting run before sending in personnel. The drone can be maneuvered with a tablet computer, an item the local fire teams already bring along for service calls. Drone cameras are designed to send back high-quality video. In an emergency, Cole believes a fire squad could more quickly determine the location of any victims as well as their medical condition. The device could also spot any hazards before firefighters are sent in.

Fire agencies are a relatively new market for the growing drone industry. The technology first came on the radar for many fire officials last year, after a gas explosion engulfed two apartment buildings in New York City. The best footage of the disaster came from a hobbyist flying an $800 drone around the site. His video went viral, and fire chiefs nationwide began clamoring to get their own flyers.