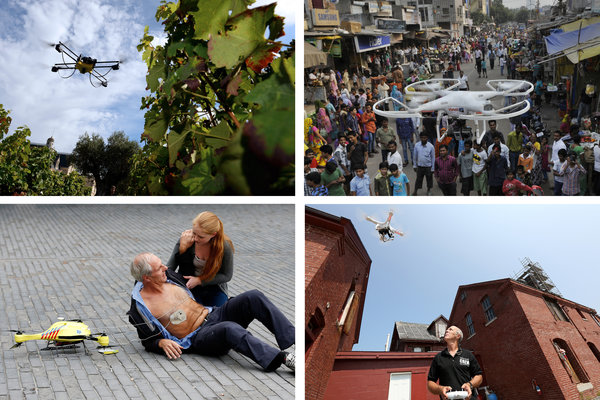 When a small drone slipped free from its operator one morning last week and flew into the Washington sky, evading radar and the best defenses of the United States Secret Service to end up a sorry wreck on the White House lawn, the incident seemed to crystallize the fear that many harbor about a future dominated by aerial machines.

But let’s not ground these mechanical birds just yet.

Rather than highlighting the actual dangers of drone flight, the White House crash-landing is a better illustration of the hodgepodge, almost backward set of rules governing the drone industry in the United States.

Untrained hobbyists like the one who crashed the drone in Washington, however, are allowed to fly their devices with relative freedom.

For years, the drone industry has been calling on the Federal Aviation Administration to loosen rules on commercial unmanned flight. The White House crash is another in a string of public relations disasters that may hamper that effort. Drones have an image problem. In the popular imagination, unmanned flying robots portend an overhead invasion of privacy, a potential for novel and terrifying aerial attack and a dangerous cluttering of our skies.

“Right now when you see a news story about an unmanned vehicle, it’s either a story about a hobbyist who did something crazy with his small toy, or you hear about a military strike in the Middle East,” said Jesse Kallman, the head of business development and regulatory affairs at Airware, a start-up that produces a kind of operating system for drones.

Commercial operators — people who are making money from their flights and therefore have an incentive to improve their training and the technology on their drones — are now barred from flying in most circumstances. And the Federal Aviation Administration is expected to release new draft rules in the next month that will allow for commercial drone operation in only a limited way. The rules are likely to prohibit drones from flying above 400 feet and require that they be used within sight of the operator.