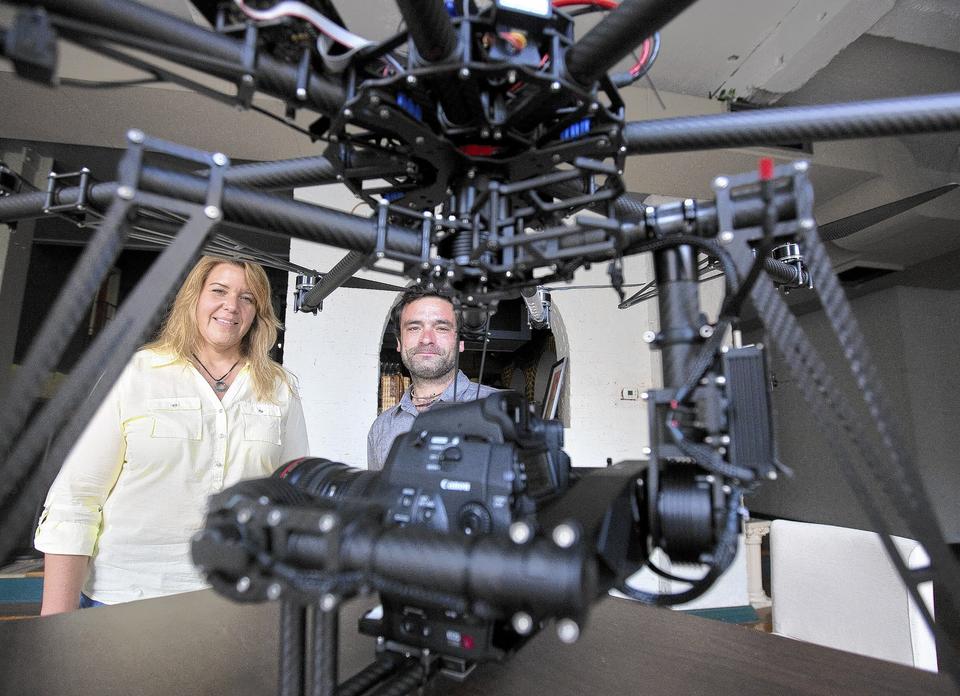 m2 Pictures in downtown Hampton found a way to save money while enhancing its cinematic capability for TV show production: using a “drone.”

“It’s really important for us to stay on the cutting edge of technology,” said Kathy Martin, m2 Pictures executive in charge of production. “Any company doesn’t want to be left behind. This is something that’s changing our industry dramatically. We’re trying to keep up.”

m2 Pictures isn’t alone in the film industry or in Hampton Roads. Other businesses in the region would like to use remote-controlled multi-rotor helicopters as a way to enhance what they already do. Commercial use is being restricted, however, until the Federal Aviation Administration comes up with rules.

And companies are growing impatient.

For now, m2’s camera department supervisor Jacin Buchanan of Norfolk practices flying the CineStar 8 HL (heavy lift), which is capable of carrying the firm’s professional video cameras. He trained for two days on the CineStar and has practiced on flight simulators and with a quadcopter, one of the smaller devices that have become popular in recent years because of their low cost — $1,000 or less.

m2 plans to take the octocopter to Alaska this fall to film footage for the “Ice Cold Killers” show for Investigation Discovery, Buchanan said. Usually, the firm has to rent a helicopter, but using a drone is safer and a fraction of the cost, Martin said.

“We’d like to know what the rules are,” Martin said, calling the technology a “game-changer.”

Across the country, real estate firms are finding that videos made with drones are better at marketing some properties. Peninsula-based Liz Moore and Associates hired a Virginia Commonwealth University film student to fly a remote-controlled model aircraft to film a handful of listings, President Liz Moore said. In particular, online video of the Marl Inn in Yorktown shows off the property in a way that’s inaccessible with traditional still photography, she said. Plus, it’s cost-effective and can get closer.

“Our firm prides itself on staying on the leading edge of new technology, so it was a natural fit for us,” Moore said. “We are sensitive to safety and privacy concerns, and so I am interested to see what the FAA issues in terms of clearly defined regulations. In the meantime, we will limit the scope of our use to filming our client’s properties with their express permission.”

To many in the unmanned aircraft systems field, these smaller devices aren’t drones because even though they’re unmanned, they’re controlled by a person throughout the flight. The maker of the popular Phantom 2 quadcopter does, however, offer autonomous features, like a return to the takeoff site if it loses its radio signal. It even allows for autonomous flight by marking GPS coordinates in a smartphone app, according to its website.

The Federal Aviation Administration treats these devices and model planes as aircraft. People using them for recreation are supposed to follow model aircraft guidelines, like flying below 400 feet and staying out of populated areas.

If unmanned aircraft are being used outside of a hobby, FAA spokesman Les Dorr says users need to get operating permission from the agency, which requires the aircraft be certified and its pilot licensed. Only two models of commercial unmanned aircraft have been approved so far.