Drones Taking Off as a Hobby in Saskatchewan 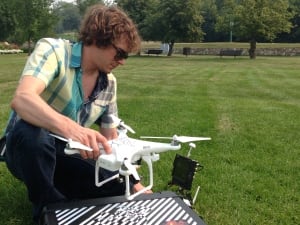 A booming hobby has more people in Saskatchewan taking to the skies.

Drones or Unmanned Aerial Vehicles (UAVs) are more accessible and cheaper than ever.

Saskatoon’s Nick Biblow loves the latest technology, a passion that led him to buy a drone online. An avid photographer on the ground, Biblow’s newest hobby is allowing him to capture stunning images.

“For photography you can get to a completely different angle,” Biblow said. “I can’t go up there without renting a plane and even then they can’t fly that low.”

Biblow said people are attracted to the photos he captures with his drone.

“I don’t do it for profit or anything, so it’s good to see that people like it,” he said.

On a clear and calm day, you might find Biblow operating his UAV in Rotary Park. While remote control aircrafts are nothing new, a flying drone in the city frequently garners a lot of attention.

“First three questions are always: How far does it go? How long does it fly? And do you have a camera on that thing?” Biblow said, laughing. “Every time, it never fails.”

Biblow said his drone will go about one kilometre and is able to fly for about 20 to 25 minutes.

The UAV craze is also hitting Regina. Derek Kanak, owner of Remote Control Hobbies, said drone sales are taking off in the past few months.

“At first, it would be one person a week,” Kanak said. “The next it would be two people a week. And then the week after it’s three, four, five, ten. It just keeps growing.”

Kanak said the majority of his customers are “everyday, guy off the street.” He believes the majority of drone consumers just want to get them up in the air to take pictures and have some fun.

“It’s how they fly,” he said. “It’s the technology inside of them. They have flight stabilization. They’re quite easy to fly. A normal helicopter takes you months to learn how to fly. These things you can pretty much pop them up out of the box.”