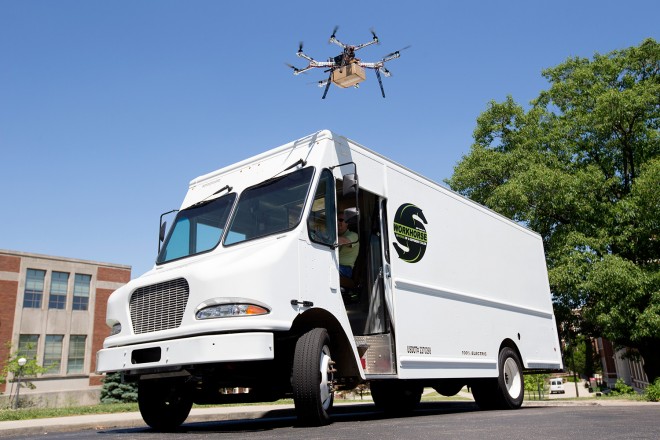 There’s a big problem with the logistics of Amazon’s grand plan to deliver packages via flying drone: Sending swarms of aircraft from Amazon warehouses to American homes isn’t nearly as efficient as simply driving the packages on four wheels. But one startup’s plan to pair trucks with heavy-duty octocopters could make drone-dropped packages more than just a novelty. By working in tandem with delivery vans, drones have the potential to make shipping faster and cheaper than ever.

Working with researchers at the University of Cincinnati, AMP Electric Vehicles is developing drones that act as a kind of sidekick to truck drivers. Instead of dragging a 20,000-pound truck five minutes out of the way to drop off a three-pound box, for example, a driver can keep working the main route while sending the drone off on side jobs. In the world of parcel delivery, where every inch traveled and minute worked is measured in dollars and cents, AMP believes truck-paired drones can save enough time and money to make the fulfillment industry take notice.

“When the Amazon thing came out, that really lit a fire,” says AMP co-founder and CEO Steve Burns. His company, which makes an electric delivery van called the Workhorse, set to work with university aerospace engineers to build a prototype delivery drone called the HorseFly. Among its most important features, the HorseFly is designed to recharge itself wirelessly just by coming near the Workhorse van and its giant battery.

The ability to power up easily allows AMP’s drones to tag along with trucks, which Burns says is key to making them useful. “We didn’t think delivering from the warehouse necessarily would work.”