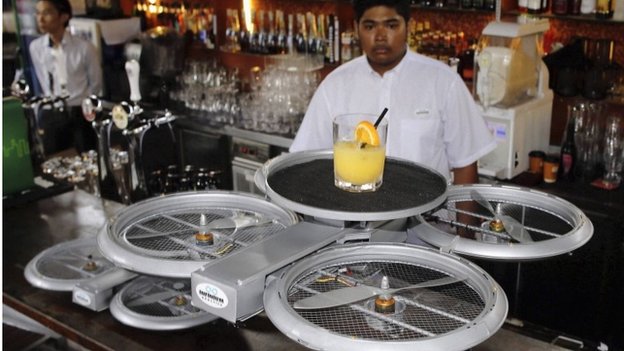 In Singapore food is a national obsession. But finding enough people to bring the food to diners is increasingly becoming a problem.

One company thinks it has come up with a solution – flying robot waiters. They are sturdy, reliable, and promise never to call in sick at the last minute.

Infinium Robotics’ drones, due to be introduced at a local restaurant-bar chain by the end of this year, can carry up to 2kg (4.4lbs) of food and drink – that’s about two pints of beer, a pizza, and two glasses of wine.

The unpiloted robots whizz above the heads of diners on paths charted by a computer programme, and navigate using infra-red sensors placed around the restaurant.

Keen on slowing down immigration and increasing efficiency, the government has put curbs on the cheap foreign labour on which the restaurant industry has long depended.

But young Singaporeans tend to shun service jobs due to their lower wages and perceived lower social status.

A number of well-known restaurants and food stalls have shut down in recent months citing the manpower shortage and high rentals, causing some handwringing over the future of Singapore’s food culture.

“Singaporeans do not want to eat sub-standard food. We need the F&B industry to thrive once again,” reads one letter recently published in a national newspaper.