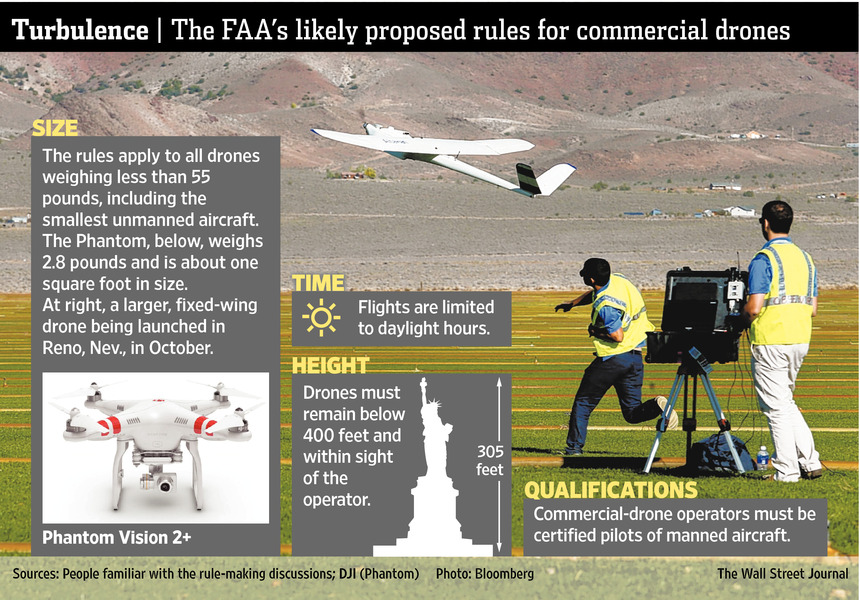 Highly anticipated federal rules on commercial drones are expected to require operators to have a license and limit flights to daylight hours, below 400 feet and within sight of the person at the controls, according to people familiar with the rule-making process.

The drone industry has awaited commercial rules for about six years, hoping the rules would pave the way for widespread drone use in industries such as farming, filmmaking and construction. Current FAA policy allows recreational drone flights in the U.S. but essentially bars drones from commercial use.

While the FAA wants to open the skies to unmanned commercial flights, the expected rules are more restrictive than drone supporters sought and wouldn’t address privacy concerns over the use of drones, people familiar with the matter said.

The agency also plans to group all drones weighing less than 55 pounds under one set of rules. That would dash hopes for looser rules on the smallest drones, such as the 2.8-pound Phantom line of camera-equipped, four-rotor helicopters made by China’s SZ DJI Technology Co. Similar-sized devices are seen as the most commercially viable drones and have surged in popularity in the last two years.

Small-drone supporters say such models are less risky to people and structures than heavier drones like Boeing Co. ’s ScanEagle, a gas-powered, 40-pound aircraft with a 10-foot wingspan that can stay aloft for more than 24 hours. ConocoPhillips Co. uses the ScanEagle to gather data on Arctic ice pack and whale migrations.

In addition, pilot certifications likely to be proposed by the FAA would typically require dozens of hours flying manned aircraft, according to people familiar with the rule-making discussions. Drone proponents have resisted requiring traditional pilot training for drone operators.

FAA officials expect to announce proposed rules by year-end. The proposal will kick off a public comment period that is likely to flood the agency with feedback. It could take one or two years to issue final rules.