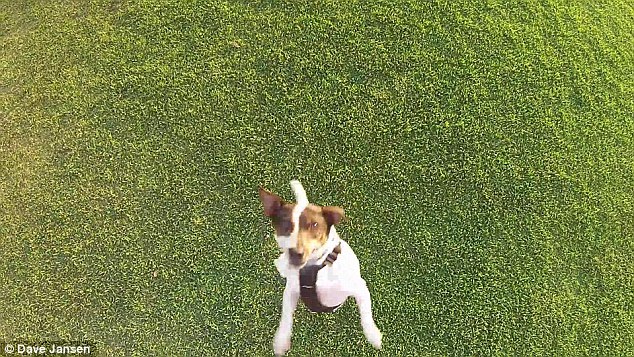 Drones have been used in emergencies and to capture the scope of natural disasters, but what if it was the new and improved way to simply walk your dog?

Dave Jansen and his Jack Russell terrier Tyler put ‘drone dog walking’ to the test at an oval near their Sydney home on Monday.

Footage from the drone shows Tyler hilariously running around, much to the delight of his owner who stumbled across the potential dog walking technique by accident.

‘The first weekend I took it out I noticed that my Tyler seemed to think it was a giant bird and he loves to chase birds. He was chasing after it and trying to jump and grab it,’ Mr Jansen told Daily Mail Australia.

‘So yesterday when I took him for a walk, I brought the quadcopter with me and let him chase it around the sports oval near my house.

‘I thought it would make a fun video to point the camera at the ground and film him. I then simply tried to keep him in the centre of frame as best I could and keep the copter high enough that he couldn’t actually catch it.’

Footage captured Tyler wagging his tail as he tried to jump up in pursuit of the remote controlled quadcopter, before he chased it across the length of the oval.

While there are limitations on where you can use a quadcopter in Australia, Mr Jansen said it’s an option he would consider using again at his local oval.

‘It is a great option for giving him exercise. He certainly runs around more than a typical walk,’ he said.

‘It wasn’t my initial thought to use it as a regular option but since the oval is at the end of my street, it will definitely be something I do on the weekend to keep him fit.

‘He loves it. The trick is to keep it just out of his reach so he can’t catch it and make sure he is sitting next to me on take off and landing.

‘Quadcopters have spinning blades so I wanted to make sure he wouldn’t have a chance to actually get near them. Thankfully he listens when told not to touch something.’

Mr Jansen, who works for a public relations company, has been learning to fly a quadcopter over the past few weeks so he can train media to use them at an upcoming event launch for Western Digital.