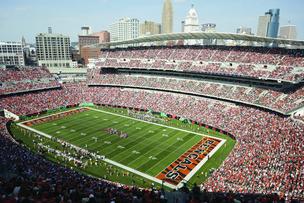 Drones over Paul Brown Stadium? Some officials like the idea.

The Federal Aviation Administration currently regulates such drone use heavily though it has granted several hundred waivers to schools, businesses and government organizations.

Several major cities in the country have purchased drones but are often met with controversy over privacy issues.

County officials said they’d probably wait until the FAA issues more rules on drone use, which is expected to happen as soon as before the end of the year.