Check This Map Before You Fly Your Drone 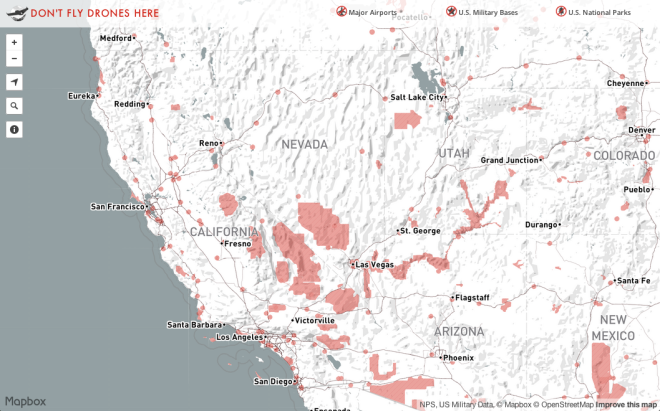 The popularity of drones is climbing quickly among companies, governments and citizens alike. But the rules surrounding where, when and why you can fly an unmanned aerial vehicle aren’t very clear. The FAA has tried to assert control and insist on licensing for all drone operators, while drone pilots and some legal experts claim drones do not fall under the FAA’s purview. The uncertainty—and recent attempts by the FAA to fine a drone pilot and ground a search and rescue organization—has UAV operators nervous.

To help with the question of where it is legal to fly a drone, Mapbox has put together an interactive map of all the no-fly zones for UAVs they could find. Most of the red zones on the map are near airports, military sites and national parks. But as WIRED’s former Editor-in-Chief, Chris Anderson, now CEO of 3-D Robotics and founder of DIY Drones, discovered in 2007 when he crashed a drone bearing a camera into a tree on the grounds of Lawrence Berkeley National Laboratory, there is plenty of trouble in all sorts of places for drone operators to get into.

As one of the map’s authors, Bobby Sudekum, writes on the Mapbox blog, it’s a work in progress. They’ve made the data they collected available for anyone to use, and if you know of other no-fly zones that aren’t on the map, you can add that data to a public repository they started on Github.

For instance, you’ll see on the map below that there isn’t a no-fly area over Berkeley Lab, which sits in the greyed area in the hills above UC Berkeley. Similarly, there is no zone marked around Lawrence Livermore National Laboratory, one of the country’s two nuclear weapons labs. I have a call into the lab to check on the rules, but in the meantime, if you have a drone, just know that the lab has a Gatling gun that has a range of 1 mile and can fire 4,000 rounds a minute to shoot down suspicious helicopters or planes that get too close.

Check out the interactive version at Mapbox.