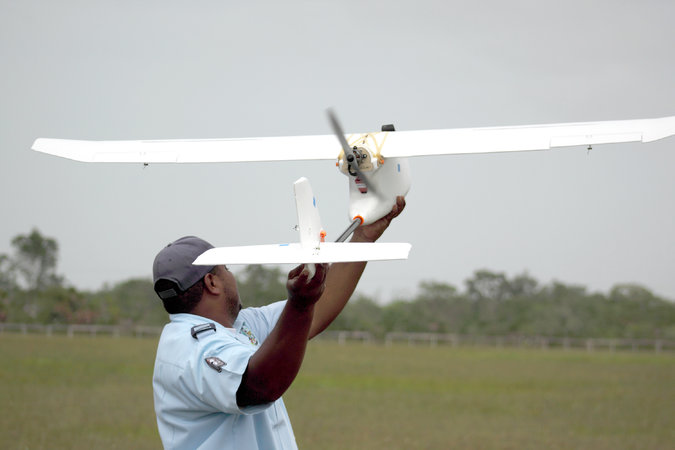 Belize has made a great effort to protect its coral reef system — the largest in the Western Hemisphere — by establishing more than a dozen protected areas. But patrolling large stretches of ocean and coastline and enforcing fishing regulations takes time, people and boats.

In June, the Wildlife Conservation Society began training operators from the Belize Fisheries Department to use two drones to help track illegal fishing activities. The drones went into use just at the start of lobster season.

This is only the beginning, said Julio R. Maaz, community fisheries coordinator for the conservation society in Belize, who hopes the drones will prove a cost-effective way to “monitor our national waters.”

And it is just one example of the growing use of drones, or unmanned aerial vehicles, in conservation.

The military use of armed drones is well known and contentious. But the use of much smaller unmanned planes, closer in size to the remote-controlled planes hobbyists fly, is spreading into all sorts of areas, particularly when they are equipped with cameras.

Drones have been used to monitor seabird populations off Australia and rainforests in Indonesia, to study caribou and their effects on vegetation in Greenland, to combat poaching in Nepal and to conduct other conservation work in Madagascar, Gabon and other countries.

Their use in Belize was made possible by the conservation society and ConservationDrones.org, a small two-year-old nonprofit run by a researcher in Australia that has been a force in promoting their use in places like Belize.

So far, said Lian Pin Koh, a founder of the group, it has built about 100 drones for use in a dozen or so countries. They can detect habitat damage over wide areas, spot signs of illegal activity and help count populations of animals in remote areas.

Dr. Koh — who was born in Singapore, studied in Europe, and received his Ph.D. in ecology and evolutionary biology at Princeton — said he started the group because of the plight of orangutans and because of his hobby. “I fly remote-controlled aircraft,” he said.

“About two years ago,” he said, “a colleague and myself started talking about problems facing orangutans.” The expansion of oil palm plantations was destroying the habitat of the apes in Sumatra. He thought, why not attach a camera to “a toy plane.” He suggested it to Serge Wich, a founder of ConservationDrones.org. They outfitted their first conservation drone and reported on the surveys of the rain forest they conducted with it.

“That led many of our colleagues to contact us,” Dr. Koh said. “They wanted to build their own drones, so we started traveling around the world and building them and starting up programs.

“Now we have a whole fleet of conservation drones built for different purposes,” he said. “The ones we built for Belize were specifically designed to withstand the harsh saltwater environment.”

Dr. Maaz said the drones would be used for about six months to monitor various locations daily. Then the Fisheries Department will step back and assess the results.

“Expectations are very high in Belize,” Dr. Maaz said. “There’s so much we can do and need to do.”