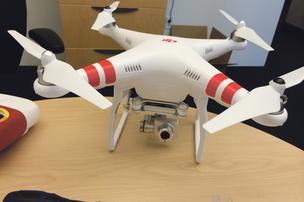 Burns said McCownGordon purchased the Chinese-made drone for about $1,000 so it could take aerial photographs it was paying third-party companies to perform. He said the drone, which is outfitted with a high-definition video camera and a 14-megapixel still camera, will save the firm about $800 a month on aerial photographs

“Aside from being super cool, it actually makes sense,” Burns said.

Aerial drones, which are well known for their military application, are bursting onto the civilian scene. Companies large and small are looking for ways to use the technology to their advantage. Burns said McCownGordon started off only wanting to take aerial photographs of its project sites but now it is coming up with new uses for the technology.

“I’ve got superintendents coming out of the woodwork with ideas about how to use it,” Burns said.

The drone, which is operated by Burns, can fly within 450 feet of its command module and is flown like a radio-controlled airplane. Its cameras can be controlled by a smart phone application, Burns said.

McCownGordon is considering using the drone to perform dangerous tasks and keep watch over its projects, Burns said. The company might use the drone to perform inspections of locations high and low. Burns said it can fly deep into wells and soar to high parapets and perform building inspections that would have otherwise required special equipment and manpower. It can also keep watch over project sites and facilitate communication between workers on and off the job site.