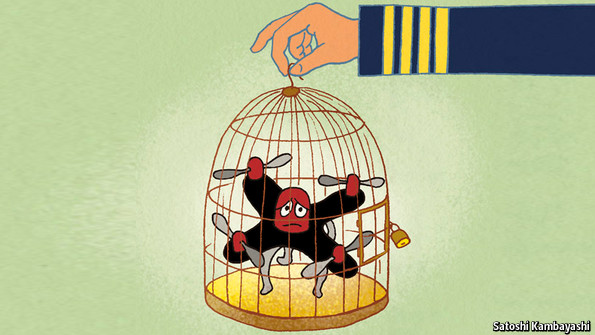 ONE of this year’s top-selling Christmas presents is a drone. For $50 you can buy a tiny quadcopter with a video camera, perfect for snapping a bird’s-eye view of your garden; for $700, one equipped with a gyroscopically stabilised camera which, when paired with a wireless tracking device on your wrist, will film you while you ski, cycle or kite-surf. More significantly still, as our Technology Quarterly outlines this week, drones could revolutionise all sorts of businesses.

Initially developed for military use, drones are taking off in civilian life largely thanks to the falling costs of commodity electronics. A smartphone contains a raft of devices that can be deployed in drones, including gyroscopes, accelerometers, wireless transmitters, signal processors and GPS units.

One immediate commercial use is surveying land cheaply and effectively. A drone can photograph a road to a resolution of 2cm, compared with the 30cm that a satellite offers—and it can do so at a third of the cost. Already farmers are using them to monitor crop growth, which in turn enables modern farm machinery to deliver exactly the right amount and type of fertiliser. In France, where the technology is widely used, farmers say drones boost revenues by €50 ($62) or so per hectare. Drones also improve safety: they can be used to do jobs, such as inspecting power lines, that currently require dangling a man from a helicopter. And they can deliver goods faster: DHL, a logistics firm, already uses a “parcelcopter” to deliver medicine to Juist, a small island off the coast of Germany.

But their potential depends on regulation. Since they can be dangerous—there are increasing numbers of reports from nervous airline pilots of drones flying near them—governments need to set rules for their use. And treatment of the commercial drones varies between countries.

America’s Federal Aviation Authority (FAA) bans almost all commercial drone use. That will soon change, as Congress has ordered it to come up with rules for commercial drone flights by September 30th 2015. But draft proposals due in the next few weeks are expected to show that the FAA continues to take a restrictive view, requiring drone operators to have experience flying manned aircraft and to keep drones within sight at all times. The drone industry suspects that this is regulatory capture—that the FAA is acting as a lobby for pilots.

The FAA’s attitude is damaging America’s drone business. Firms are shifting fledgling drone operations outside the country. Amazon has tested a drone-delivery service in Canada while Google has experimented with robotic aircraft in Australia. Overly protective regulation also leads to less safe skies. The ban is widely ignored and the new rules will probably be too. Unlicensed flights will be uncharted, the craft unidentified and their operators uninsured.