Drone-Maker DJI Wants to Take ‘Selfies’ to the Skies 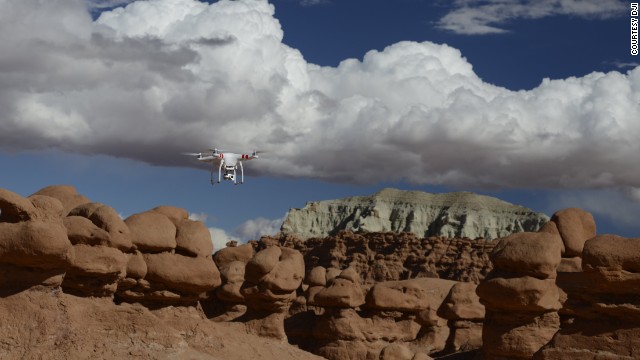 What comes in a white cardboard box, weighs little more than a kilogram and can be purchased in a few clicks from Amazon?

Few people would guess a drone — a term that conjures up stealth strikes and spy movies.

But that’s the point for DJI, a Chinese company that dominates the young but growing market for personal and commercial drones.

It wants to make the airborne gadgets, if not soft and cuddly, at least unremarkable.

DJI believes drones like the Phantom will soon become another “camera in your bag,” allowing photography enthusiasts to embrace “dronies” with same fervor as “selfies.”

“It’s sort of an extension of the selfie stick really,” says Cheng. “It’s an unlocking of the third dimension for camera positioning.”

Their latest four-propeller drone is equipped with a high-definition camera and a wi-fi transmitter lets pilots watch the video streamed live to their smartphone that attaches to the controller.

Mounted on a three-axis gimbal or stabilizer, the camera can be rotated while the drone hovers in place enabling it to capture stunning aerial images such as close-ups of a volcano.

The company was founded in 2006 by engineer and remote control helicopter enthusiast Frank Wang, who started out making kits for hobbyists before launching the Phantom range in 2013.

It has expanded quickly, growing from 20 employees in 2009 to 2,500, who are mainly based at company headquarters in the southern Chinese city of Shenzhen.

Operating at the cutting edge of a new technology is rare for Chinese companies, which are typically regarded as manufacturers of ideas and designs hatched in Silicon Valley and elsewhere.

It’s the kind of company that China needs more of if it wants to make the transition from world’s factory floor to a home for innovative companies with global reach.

Cheng says Shenzhen marries the best of China’s manufacturing prowess with a rich pool of design and engineering talent.

“You don’t have to wait eight days for a prototype to come back in.”