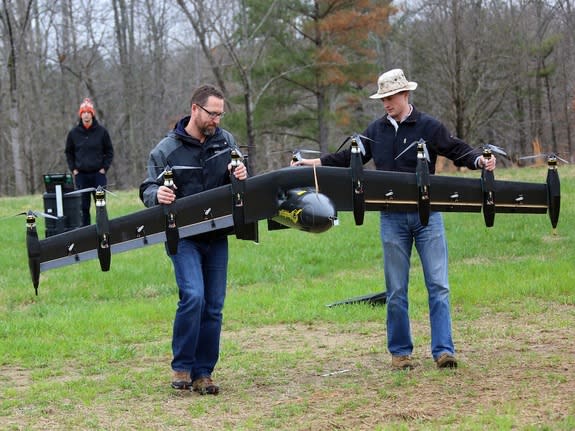 A huge, 10-engine drone dubbed “Greased Lightning” successfully completed a series of flight tests recently, paving the way for new types of unmanned vehicles that could one day carry people.

Earlier this spring, NASA engineers flew the so-called GL-10 (the “GL” stands for “Greased Lightning”) prototype drone at a military base located about two hours away from the agency’s Langley Research Center in Virginia.

GL-10 has a 10-foot-long (3 meters) wingspan and 10 engines: eight on the wings and two on the tail. The 62-lb. (28 kilograms) drone can take off vertically like a helicopter, but in the air it flies more like an airplane. Future versions of the drone could be used for a variety of applications, the researchers said. [5 Surprising Ways Drones Could Be Used in the Future]

“It could be used for small package delivery or vertical takeoff and landing, [and] long-endurance surveillance for agriculture, mapping and other applications,” Bill Fredericks, an aerospace engineer at the Langley Research Center, said in a statement. “A scaled-up version — much larger than what we are testing now — would make also a great one- to four-person-size personal air vehicle.”

Over the course of five flight tests, the drone was able to take off and hover like a helicopter, before demonstrating that it can also fly like a conventional airplane. Now, the researchers are examining ways to make the drone more aerodynamically efficient, Fredericks said.

The GL-10 drone is the latest in a series of prototypes used to develop the concept. Engineers at the Langley Research Center built 12 prototypes, ranging in size from 5 lbs. (2.3 kg) to 55 lbs. (25 kg), with each successive version getting closer to a real aircraft’s weight and design.