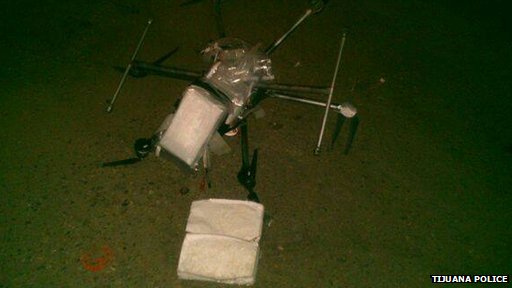 A drone carrying illegal drugs has crashed near a US border crossing in Mexico.

The quadcopter carrying 3kg (6.6lb) of methamphetamine was found in pieces in a supermarket car park near San Ysidro.

Mexican police said the drone had probably crashed because the drugs onboard had been too heavy for it.

They added that drones were increasingly being used to ferry illicit items across the border with the US.

In a statement, the Tijuana police said the drugs had been divided into six packets crudely taped to the body of the drone.

After receiving an anonymous call about the crashed craft, Tijuana police recovered the drone and are now examining it to see if they can trace who set it flying and where it began its journey.

The statement said the drone was a prototype that could be given GPS co-ordinates and would then travel to that location autonomously. No pilot was needed to guide it.

The Tijuana police said drones were just one of the many innovative ways drug-smugglers were using to ferry illicit substances across the border. Other methods included catapults, tunnels and ultra-light aircraft.

Last year, the US Drug Enforcement Agency (DEA) said drones were becoming so popular as a method of drug transport that some gangs were manufacturing their own.

Engineers were hired to make the devices for the drug cartels so they could carry more weight than those that were commercially available, it said.

The drones were making more than 150 trips a year, suggested figures from the DEA.