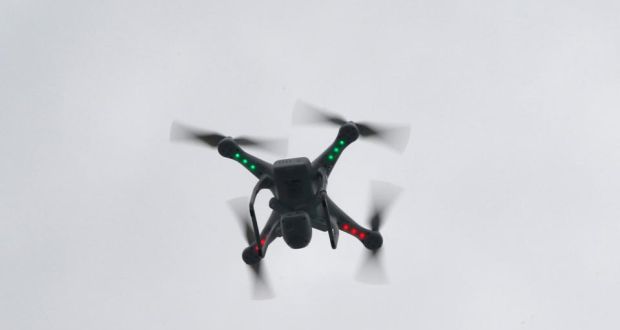 The Irish Aviation Authority has issued permits to 22 operators to use drones or remotely piloted aircraft systems (RPAS) in the Republic.

The RPAS sanctioned by the authority are used mainly for aerial survey, filming and photography.

The rapid advance in technology means the cost of civilian drones had dropped to a few hundred euro and can be purchased online. There are now 22 licensed here compared to 14 this time last year.

Aviation regulations governing drones in Ireland mean that operators are restricted to flying no higher than 150m and no farther than 500m from the control station.

A spokesman for the authority said it was reviewing its policy on making public the names of those with permissions to operate the aircraft systems.

“Each permission granted by the IAA contains the stated purpose(s) for which the operator is authorised to use the RPAS.

“At the present time we are unable to make these details public due to data protection legislation,” said the spokesman.

Last month a remote controlled helicopter carrying drugs crashed in Wheatfield Prison in Dublin. The small craft was not registered with the authority.

The European Aviation Safety Agency is in the process of introducing pan-European legislation to cover the operation of systems with a mass of 150kg or more. Drones below this weight are subject to national legislation.

The widespread use of drones in Europe is likely within the next few years if EU and US plans to create a new aerospace market come to pass.

A European Commission working paper published in September 2012 urges member states to develop an EU-wide plan to ensure drones are safely integrated into common aviation traffic by 2016. The paper, entitled Towards a European Strategy for the Development of Civil Applications of Remotely Piloted Aircraft Systems, predicts many more applications and uses will emerge once the technology is widely disseminated. This is expected to support substantial economic growth, generating thousands of jobs.